I think I’m being stalked.

I still need to prove this theory though. I was walking to work yesterday morning, leaving home a little earlier than usual to enjoy my stroll as it was a beautiful sunny day. We’ve been having these crazy windy days as of late, with grey skies and continuous light drizzles in the mornings. The winds picked up again today, howling its way down the hills and valleys of Wellington. Yesterday’s calm breeze and sunshine was short-lived, but appreciated nonetheless.

Anyway, back to my stalker. I was happily walking down the streets of my suburb yesterday, humming a made-up tune to myself, when I thought I heard a pretty similar -yet a tad more shrill- humming slightly above me in the trees to my right. Was something copying my humming? I slowed my pace, stopped humming and glanced up, not really seeing anything. There was silence except for the usual surrounding sounds – cars driving past and the wheels of a bicycle coming down the path.

I continued walking and humming, and then a mere few steps later the melodic-but-shrill tune started again to my right, this time followed by something that sounded like knocks on a door – an insistent “tok!-tok!-tok!“. I looked up again, and saw a black feathered creature staring curiously back at me. As I looked upon him the bird repeated his song and call again, a “phweeee-treeeet-phweeee-treeet” and then “tok!-tok!-tok!“

He kept looking at me, his head cocking to one side and another. I walked a few steps ahead, and looked up to see him hopping from where he was perched and settling into another branch closer to where I was standing. He looked down at me again. I don’t know why I did this next, but I smiled at him and waved.

I’m no bird-watcher, and I can barely identify bird types aside from your common ones like pigeons, seagulls and crows. This one had black feathers, but he wasn’t a crow. He looked more like a parrot, my identifying feature being his beak. But what type of parrot, I haven’t a clue. He also had a red tag on his left foot – I’m not sure if it is a tracking tag for bird population research/conservation, or if it meant that he was someone’s pet.

I took out my phone-camera to snap a photo of him, but he flew off and soared away. “Oh well,” I thought to myself, and continued walking on. But barely a couple of minutes later there was a rustling in the trees above me and AGAIN, I hear his sing-song and knocks! I looked up and there he was! Looking down at me. I still had my phone in my hand, and thus managed to quickly get a shot of him before he fidgeted away.

Sadly my phone’s a tad outdated and doesn’t really take crisp, sharp images – so this photographic evidence I have of my new stalker isn’t the best: 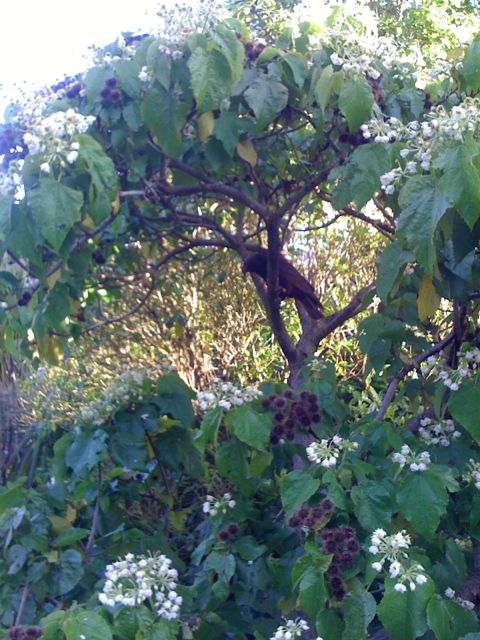 Yes I know, no big deal about seeing a bird in the trees. So why do I call him my stalker?

Well, for one: this particular feathered fellow followed me for an additional 10 minutes after I first spotted him on my walk to work yesterday. He’d fly off for a little bit, and then when I’ve walked a few more meters down the street he’d reappear, settle on another tree nearby, and look at me. And then he’d hop a few branches away, rustle his feathers, groomed, and waited for me to catch up, then continue on to the next tree. I swear, he did this all along the way right up until I got past a little playground, and on to a tiny alley that is my shortcut into the bigger city street down the block. It was at this point, where there was a bit of shrubbery, that I looked back and noticed he’d flown off back the way we came.

That in itself was quite a memorable animal encounter for me – but what happened today was what prompted me to feel like I wanted to blog about this. Believe it or not, on my walk to work this morning (in the cold, windy drizzle this time around), HE REAPPEARED!

I had walked probably about 50-60 meters away from my house when above the winds, I heard a familiar, loud and insistent “tok!-tok!-tok!”. A small jolt of disbelief washed over me as I looked up and saw Mr. Black Parrot-like bird fly overhead and perch on the roof a few houses down the street. I called out a happy “Helloooo birdie!!!” And yep, you guessed it – he continued following me on my walk right up to the same bushes as yesterday. Mind you, he keeps his distance – never getting too close to me nor letting me get too close to him. But he follows me alright.

I’m wondering now if he is someone’s pet, smart and loyal enough for his owners to let him out in the mornings which may explain his boundary limits to not follow me further beyond that alley I cross. Or if he is wild, and has found something about me that he is curious and interested to tag along my walks to work. Whichever it is, this is too cute and special an experience for me that I had to write about it!

Tomorrow I intend to walk to work again, and see if he makes another appearance. If he does, then I’m definitely going to label him my stalker. And unlike my experiences with other stalkers in the past, I happily welcome the attention from this one! 🙂

7 thoughts on “The Singing Stalker”