It’s been a nice long day and I’m just about ready for bed. However I am still feeling a tad full from our dinner (at a Thai restaurant we found along the alleys of Thamel near our hotel), so I figured I’ll sit up and write a bit whilst my food digests.

The top thing I’m bursting to share with you is about the views we had as our plane made its entry into Kathmandu Valley! This morning as we were checking in at the airport in KL, I asked Baba if he had paid for some pre-booked seats to ensure we had at least a window seat on the journey in. He said he hadn’t, which seemed a tad silly to me because (1) It’s our first time to Nepal, and (2) everyone knows Nepal has one of the most beautiful countrysides in this world. Those two points alone should be enough reason to spend a little bit extra for a window seat, no?! There are potentially breathtaking aerial views of THE HIMALAYAS to be seen! It was a facepalm moment for me for sure. But Baba said he was too overwhelmed with all the other arrangements he’d made for the trip that the seat-selection thing totally escaped him. “Peninglah!” he laughed. Fair enough I said, but I’m going to make sure we pick our seats for our return flight!

Still, luck was on our side as our system-assigned seats landed us on the right side of the plane (do we also use “starboard” for aircrafts, or is there another term?), with a window seat to boot! I was overjoyed, and Baba kept rubbing it in that I need not have nagged about the seat purchases in the first place.

The initial view of the flat plains as we neared Nepal

As we made our approach towards Kathmandu, all you see below you are flatlands. Acres upon acres of brown and green patches as far as the eyes can see. I started to wonder, where do the hills, valleys and mountains begin? Not long later, the plains start to give way to slight rolling hills, and you can see the winding paths of rivers snaking their way towards the oceans.

The plane keeps on going, and I shifted my eyes up towards the skyline. The mix of blue skies and fluffy white clouds are always pleasing to look at – the 5-year-old in me always imagines them to be inhabited by Care Bears and unicorns! As I was day-dreaming away suddenly the clouds, way up high and far off in the distance, in their forms that look like puffy balls of cotton, seem to change shapes. They looked sharper, pointier… I thought to myself, “I’ve never seen clouds look like that.” I focused my eyes on the horizon, and let out a small excited squeal; those weren’t clouds anymore! I was seeing my first glimpses of the Himalayas – the snow-covered peaks of its mountains are so high that they surpass the clouds. I feel that nothing on film or in pictures can begin to portray how surreal and beautiful the sight was. The sheer size of these mountain ranges slam into you, as you see them towering majestically above all lands – their snowy chests, jagged shoulders and sharp pointy heads pushing up and over the clouds as they proudly peer down onto the rest of the world like ancient guardians. 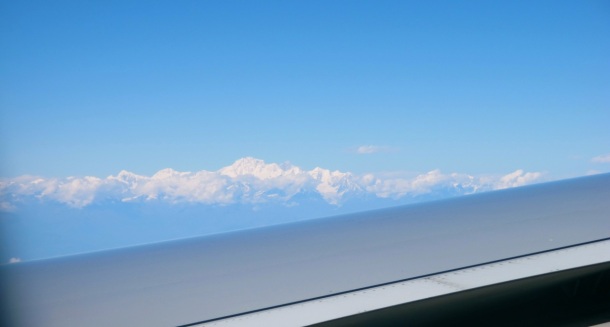 First breathtaking glimpse of the Himalayas – see how those peaks tower above the clouds!

So, if any of you readers are flying KL-> Kathmandu for the first time then I’d highly recommend getting a window seat on the right-hand side of the plane. If you’re flying AirAsia, the views is worth the extra they charge to select your seat, I promise! (Tony Fernandes, if you’re reading this… do I get commission for helping you sell pre-booked seats on your Kathmandu flights? *nudge nudge wink wink*)

View of the mountain ranges taken from my window seat 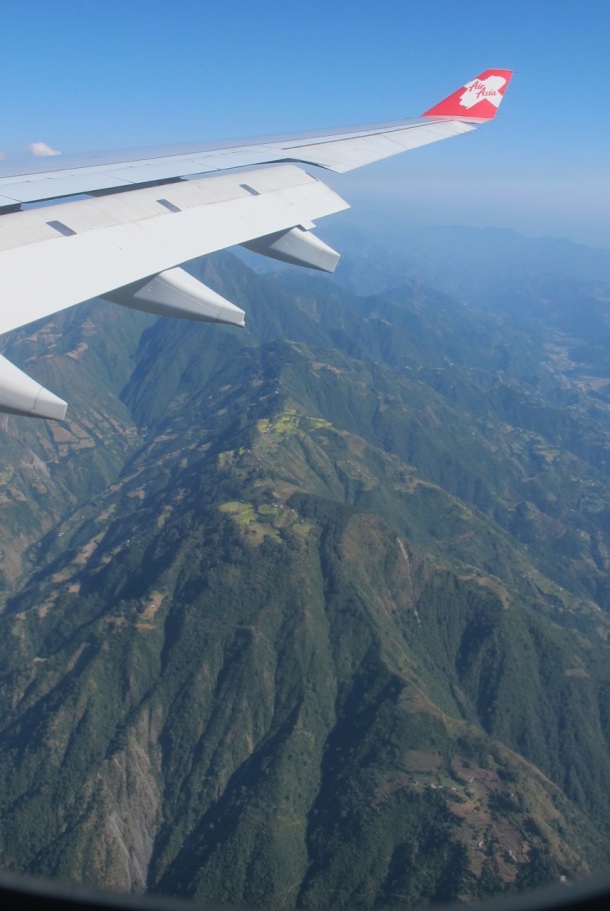 The plains give way to beautiful hills and valleys as the aircraft turns right and heads closer towards Kathmandu. And a little brand placement here for AirAsia (not that they’re paying me anything for it, sadly :p)

Soundtrack: Feist – My Moon My Man
Mood: Appreciative
Location: Room, Hotel Moonlight, Kathmandu, Nepal
Random thought: Should have bought me that chocolate donut I saw in the bakery window

One thought on “Kathmandu, Nepal – An entire post about my window seat view”