Yesterday has been added into one of my ‘memorable moments in life’ list. I’ll tell you why.

I had some time off work this week and took a local flight up to Auckland on Tuesday 8th November. I have a cousin who has been studying in Auckland University for the past 4 years and is due to go home for good in a couple of weeks’ time, so I wanted to catch up with her here before she left. At the same time, the New Zealand branch of the capoeira school that I train with back home in Malaysia was hosting their 4th International Summit here in Auckland, and with dates coinciding I decided to take the chance to meet up with my Mestres (capoeira masters), witness and support their event.

So what is capoeira?

Capoeira is an Afro-Brazilian art form that originated in Brazil, and is a combination of martial arts, dance, music, tradition and culture that originated mainly from the descendants of African slaves in the 16th century.

I first started taking classes about a year and a half ago, when a friend from work invited a bunch of us to attend introductory lessons given by his friend who’d returned from New Zealand and had set up a branch of the capoeira school in Kuala Lumpur. It looked intimidating to me at first, what with all the spinning kicks and acrobatic movements that I’ve seen in demonstrations and videos. But after attending classes and experiencing it for myself I got hooked – I loved how it gave me a good sweat, and I found that capoeira wasn’t just a sport; it has a lot of soul and spirit to it. Also, being a lover of music made me relish the fact that capoeira games draw a lot of its energy from the music that’s being played and sung. 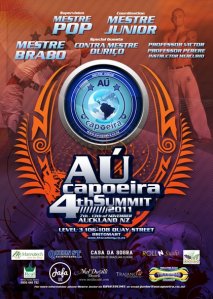 There are many capoeira schools that exist today, and the one I train with is AÚ Capoeira Malaysia under the guidance of Monitor Saracura. The Malaysian branch owes it’s lineage to our parent school Escola AÚ Capoeira in Brazil, and AÚ Capoeira New Zealand (Auckland).

This past week the AÚ Capoeira New Zealand school hosted their 4th Summit here in Auckland. Programs such as trainings, workshops, sharing sessions and movie screenings are held as part of the summit, which culminates in the Batizado ceremony – typically an annual event in which new members of a capoeira school is ‘baptized’ (the literal meaning of the Portuguese word ‘batizado’) officially into the group they train with. The capoeiristas (capoeira players) are given their first corda (literally ‘cord’, the belt that capoeiristas wear), and some receive new corda replacing their previous one to signify their progress in the experience levels of capoeira. These levels are differentiated by the colours of the corda, which may differ between schools. Grading system for the school I attend can be found here.

Batizado events typically see the attendance of the highest level teacher of a particular group, in our case this was Mestre Pop, along with capoeirista teachers and students from other schools and groups, who are invited to participate in order to allow for development of the game – everyone learns from each other’s different skills and styles as different teachers have different approaches and strengths. 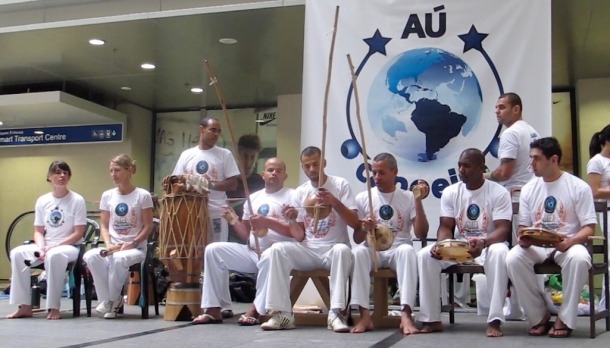 Yesterday I attended the Batizado event for the school here in New Zealand, excited about being able to see for myself how such an event takes place. I was there mainly to watch, take videos and pictures, and root for my teacher Monitor Saracura in his grading ceremony.

The event went as I expected, with me happily cheering the other students (especially the little kids!) as they were graded, clapping and singing along as they entered the roda  (the circle in which a capoeira game is played). The roda was played in stages – starting with the kids’ roda, then the adult ones which progressed in groups based on the corda colour that was being handed out. What I did NOT expect was, three groups into the grading, Mestre Junior who led the event called out MY name to come up!

I thought I heard him wrongly for a while there, and then I looked up at him and saw that he was eagerly smiling and nodding my way, to which I let out a loud, screechy “WHAT? NOOOOOOO!!!” Eyyup, that caught me by surprise indeed.

So there I was, laughing at how the whole thing had sprung up on me and how unprepared I was – both mentally and physically. I wasn’t anywhere near warmed up – on the contrary I was freezing cold; I’d had my sweater on the whole time throughout the event which I then took off when they called me in. I felt so awfully nervous too! Felt my heart racing as the roda for my grading group started.

In many schools, when a student is being graded they will play capoeira against higher level capoeiristas, namely the teachers in attendance: the mestres, professors, and instrutors from their own and other schools. The tradition is such that the student is given a challenging game by the teacher(s), and needs to be subsequently taken down (in layman’s terms: made to fall flat on the floor muahaha) by the higher level capoeirista they are playing with. This symbolizes the ‘baptism’ of the student and encourages the process of humility and improvement in their game.

My nervous self waiting in line to play in the roda

Needless to say when my turn came to step up and get into the game, I was a nervous wreck! I tried to blank my mind out and concentrate just on what I know and have learnt so far, to let the music and my body lead the way. It pretty much passed by in a blur after that. I was faced in the roda by Professor Perere of Aruandê Capoeira NZ, and Instrutor Corvinho of Capoeira Brasil.

Some not-so-impressive action shots from my game:

Mid-game... I wish I'd had more preparation and practice!

My second fall! Which pretty much ended it ;D

And that was that – I was done! Mestre Pop then came around to congratulate all of us, and I had the honour of having him hand me my blue corda. I felt so elated! I didn’t at all expect to be graded during this event (a capoeirista is usually graded in the school & country they begin their capoeira journey in), and best of all I did not expect to obtain the blue one! The other guys in the group were in many ways so much more skilled than I am… I felt so undeserving. My expectations were to have been graded the blue-white corda sometime next year when we’re in the hopes of organizing a batizado for our school in Malaysia!

Congratulatory embrace from Mestre Pop, who is an absolutely warm, humble, wise man and a great teacher

Thus all in all it turned out to be a great day for me – definitely one to remember for sure. I have nothing but the highest of appreciation to everyone from the event, teachers and students alike, who embraced me into the group and shared with me their energy, knowledge, and spirit of the game. 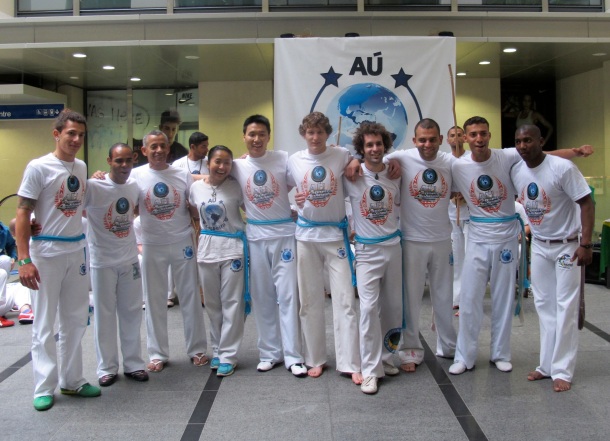 Myself and the 5 other guys in the same grading group, along with our teachers

With Monitor Saracura and Mestre Junior

Soundtrack: The Verve – Love is Noise
Mood: Happy
Location: Cousin’s bedroom, Auckland, New Zealand
Random thought: Why is no one replying any of my texts this evening?

6 thoughts on “My First Batizado!”